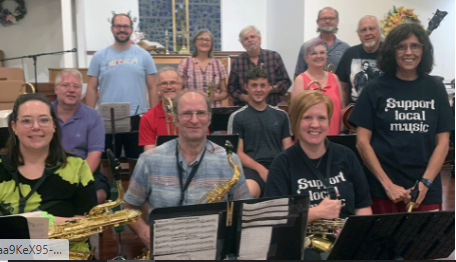 Just for Kicks Jazz Band, a newly formed band of 16 local musicians, will be giving “Say Goodbye to Summer” performances at Massena and Norwood in September.

Their first September performance will be at Massena Springs Park Friday, Sept. 3, starting at 6 p.m.

The ensemble will perform a number of standards including “Sing, Sing, Sing” and “Stompin’ at the Savoy,” made famous by Benny Goodman, Duke Ellington’s “It Don’t Mean a Thing if it Ain’t Got that Swing,” as well as Gershwin’s “Embraceable You.”

The band will also play more recent rock pieces, among them “Blood Sweat and Tears” and “Spinning Wheel.”

Other songs to make you swing include “Birdland”, “I Got Rhythm”, and “Sweet Georgia Brown”.

The band will be joined by vocalists Keri Lucey of Massena and Norwood-Norfolk’s George Biffer, in Aladdin’s “A Whole New World.”

In addition to the Just for Kicks Jazz Band, “The Ladies” will perform a few tunes.

“Sixteen musicians, young and old, came together in June to play some challenging jazz just for the fun of it. The Just for Kicks Jazz Band is comprised of men, women and students who love to play and get great joy when the music comes together,” said Chris Paige, a retired instrumental teacher who leads the band.