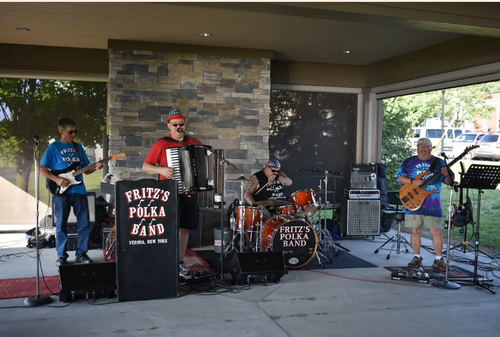 Fritz's Polka Band: Back by popular demand! Fully Sponsored by:  Sandstone Family Dentistry ( Stacey Feeley Howlett)
Fritz's Polka Band (FPB) was formed in 1978 by lead accordionist, the late Fred Scherz Sr., and his eight-year old son, Fritz, for whom the band was named.  Sadly, Fred passed away on November 14, 2009, but FPB has vowed to carry on his legacy! Playing everything from modern-style polka to country to rock and even blues, FPB performs an eclectic mix of musical styles! Fritz's Polka Band is NOT an oompa pa band or the stereotypical "polka" band. In fact, FPB is known for breaking the stereotype regarding "polka" music. FPB is the first polka band to perform at a Woodstock Festival (Woodstock '99)! On October 7, 2010, FPB was inducted into the Syracuse Area Music Hall of Fame!

Fritz's Polka Band has made 19 recordings, which have achieved international airplay. Individuals of the band, and the band itself, have received some prestigious honors. As a group, FPB has performed on stage with "Canada's Polka King," Walter Ostanek (Grammy winner), "America's Polka King," the late Frank Yankovic (Grammy winner), LynnMarie Rink (Grammy nominee), and Glen Burtnik. Individually, Fritz has performed on-stage with Steve Augeri (former lead singer of Journey) and Charles Giordano (current accordionist/keyboardist for Bruce Springsteen).  FPB has performed at B.B. King's Club (2003), The China Club (2006), and The Metropolitan Club (2007) too!  FPB even appears on "The Manchurian Candidate" DVD, released by Paramount Pictures in 2004!  In 2011, FPB had two different songs appear in episodes of the hit cable TV show, 'Breaking Bad', which airs on AMC.

Covid information will be posted as we review current guidelines and finalize decisions. For the past eleven years, the Concert Series has allowed us to showcase local North Country musical acts along with other acts not often showcased in this area.   These acts brought enjoyment to over 6,500 people in 2019! The twelfth year of the Waddington Concert Series was scheduled to begin on June 19th, 2020. Due to the pandemic all concerts were rescheduled for summer 2021. We start off the tentative sensational 2021 season with our opening show  on June 18th. We sincerely thank our supporters and entertainers for their understanding, cooperation and loyalty! We are excited to present nine fantastic concerts in our beautiful  pavilion at Island View Park rain or shine!!!  We can't wait to resume our series!